June 12, 2017
Day 3 - New York
For our 1st year wedding anniversary we spent the day roaming around Central Park, visiting Grand Central Station, watching the Yankees, visiting the 9/11 memorial and going up to the One World Observatory at the new World Trade Centre. My husband surprised me with a great tour making it a day I'll never forget.

Between all this came a range of food tasting. It started with a hot dog from a street vendor outside Yankee Stadium - mustard, ketchup and a soft bun made this cheap roadside treat absolutely delicious. The fluffy bun, salty sausage and rich mustard was the perfect ballgame accompaniment. At $5.99 for two hotdogs and water, it was a lot cheaper than in Yankee Stadium and quicker to get. There so so many of the yellow food stands across NY specialising in yiros, hotdogs and meat. Pick one and indulge.

Then after visiting Washington Square Park we visited The Kata roll company around Greenwich Village, specialising in Indian influenced wraps made with either roti or parathas. While a little greasy, the tasty chicken, fresh herb salsa and flaky paratha wrap made this a great afternoon snack. Perfect for vegetarians. 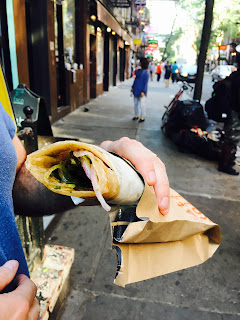 After our visit to the One World Observatory we hit up Sunny and Annie Deli in alphabet city for a Reuben sandwich. At $8.95 a sandwich, it's big enough to share. The meat is freshly cut, bread toasted and sauce made a perfect salty and tangy combination. With a pickle on the side, it was a delicious sandwich. May not look like much on the outside but a great 24/7 sandwich place. 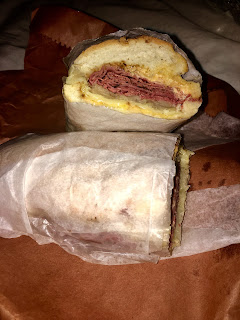 A walking tour around Soho, little Italy and Chinatown opened up the door to many tasty delights. We started with a pork bun from Lune Moon Baker in Chinatown. The dough was soft and pork filling salty and slightly sweet. However the pork to bread ratio was a little off - meat filling not very generous. At 80c it was worth the taste though. We had pork but there was also vegetarian and chicken sausage options. 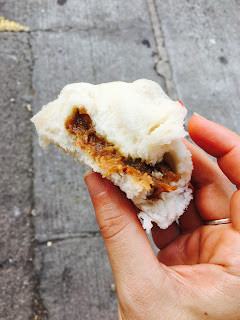 We then went to Alleva of Little Italy, the oldest Italian cheese store in America. We shared a provolone and salami sandwich and ricotta balls with napoli sauce. Walking in felt like we were in Rome again. It reminded me so much of Italy that when the lady spoke to us with an American accent, I was actually shocked for a moment.

The cheese was fresh, meat salty and bread nice and toasty. The ricotta balls centre were creamy and delicious however outside lost it's crunch because they were reheated. Yummy but lack of crunch was a little disappointing. I highly recommend this place for a great take out, authentic meal. Sandwiches range from $10 - $15. 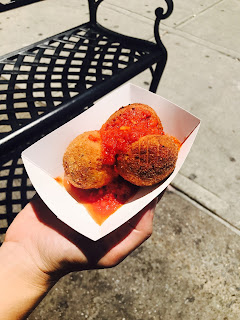 Then to finish off the afternoon we had a cold coffee at Ninth Street Espresso. If you like strong coffee this won't be for you however for a refreshing cold drink it hit the spot. 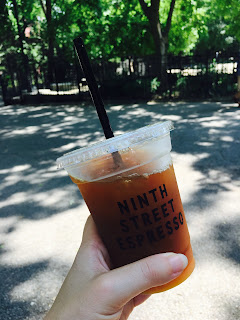