Showing posts from October, 2011
Show All

The Cushion House - my attempt at making Manti 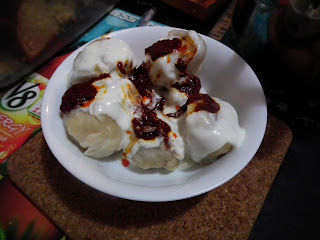 I've recently moved back to my hometown, Adelaide. However before departing I had to go back to one of my favourite Turkish places in Sydney. Lucky enough, my flatmates had the same idea. They kindly took me out to dinner to wish me luck and the destination,  The Cushion House in Glebe. Now for those who read my European Food Safari post, you would have seen that my favourite yoghurt based meal in Europe was a dish I had in Turkey called Iskender. The other dish I also love is called Manti. It's like little turkish meat filled dumplings with a beautiful yoghurt and garlic sauce, finished off with a rich tomato sauce and paprika. It's such a nice and fresh dish. Often meat filled dumplings can be heavy, however at The Cushion House the manti is done so small and so perfectly that with two bites, they melt. The yoghurt on top adds a tang and helps with digestion. A little tip, share a pide and manti with someone and get some turkish bread to dip in the leftover yoghurt sa
Post a Comment
Read more
More posts