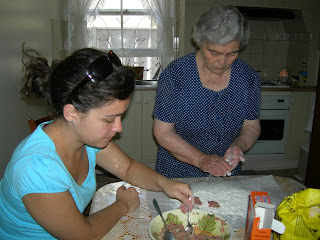 I grew up always being told that I was similar to my Papou (Grandpa) who passed away before I was born - I had his sarcastic personality and while he was more quiet then me (I'm loud...I won't lie), we were both genuine people. However it was my great-grandpa that I took after in the food department.

Before I go on with this story...a little bit of background. I'm 24, living in Sydney, grew up in Adelaide (which no matter what people say...I LOVE), I support the Adelaide Crows, I'm Greek and this is my first blog. To start I want to be honest and say that yes, all of the reality TV cooking shows have given me the kick up the ass I needed to start this blog. However it is my families passion for food that gave me this idea (also my friend Nicky - thanks Nicky!).

There are two things I know about my great-grandpa. One was that it took a few goes to get my great-grandma to agree to marry him. The second is his love of Greek yoghurt - this is a trait I inherited.

I always loved Greek yoghurt, however it was when I was 12 that I started to eat it on everything. My yaiya would give me a tiropita and I'd put a tablespoon of Greek yoghurt on it immediately. Even now I add it to everything - pasta, cereal, salads and deserts.

So the deal is this...
- I'll post recipes I have cooked (good or bad) with a focus on those with Greek yoghurt
- If you as a reader would like to challenge me to match a food with yoghurt, I'll try and cook something with a panel of judges (most likely my flatmates) providing their opinions - I'll be honest I promise!
- I can't help it, I'll post about amazing restaurants I've been to (particularly those where I've had a meal with yoghurt).

Also, I'm travelling to Europe in July. Every country I go to, I'm going to try the local yoghurt and a dish where yoghurt is a key feature. I'll share my findings and hopefully come back with inspiration on how to further use yoghurt in my cooking. Stay tuned for this :-)
introduction