May 23, 2018
Growing up a taco meant mince beef, lettuce, tomato and sour cream in a crunchy taco shell. Old El Paso would be the Mexican chef in our household. Don't get me wrong, my mum is an excellent cook. However growing up in a Greek family, Mexican never frequented the dinner table. So as a way to mix up our mealtimes we would sometimes enjoy the crunchy taco that I thought was the epitome of Mexican cuisine, despite the hard shell tortilla cutting the roof of my mouth after every bite.

Little did I know at 10 that Mexican cuisine was so much more. Now I love Mexican and often dream about the tacos and burritos I ate when traveling through California. Honestly I'm still craving the baja fish taco from Garaje in San Francisco I ate a year ago.

So my husband and I like to experiment a little when it comes to tacos and our most recent, crispy salmon baked to make it healthier.

The pineapple salsa mixed with the salmon is a delicious combination that pops in the mouth. 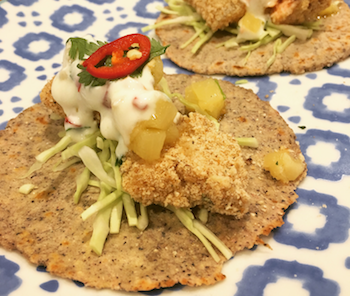 
Method:
You can certainly shallow fry the salmon, it will work out crispier. I just opted for the healthier option.

Fun farewell taco fact this time...
"While there is some debate over when exactly the first taco was created, most experts state that the first taco was actually invented somewhere between 1,000 and 500 B.C. At the time, the taco was more about having an edible spoon and since has morphed into the dish that we know today."