January 17, 2017
I’m always looking for some filling, fresh and yummy accompaniments to a meaty summer BBQ. A side that can stand alone and isn’t just the obligatory greenery on the plate that justifies the three sausages next to it.

Pumpkin is my new favourite vegetable – so versatile, colourful and flavoursome. So I wanted to come up with a BBQ side that would utilise pumpkin in all its glory. A pasta salad was an obvious choice!

This light and summary pasta salad is the perfect addition to a summer BBQ. 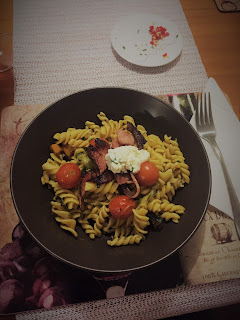 Ingredients:
Method:
This recipe actually makes an amazing cold pasta salad or simple weeknight meal, served warm. For a vegetarian alternative just remove the bacon and consider adding some olives for some salt.