November 15, 2016
As Christmas draws near I wanted to use my next few blog post recipes to explore what other culture’s Christmas table looks like. In Australia, prawns, ham, BBQ and the humble Pavlova commonly fill people’s Christmas table. However for other countries, traditions differ. The Japanese celebrate Christmas with KFC and the Dutch make a biscuit called banketletter (meaning letter cake), which is made from marzipan or pastry and made in the shape of the first letter of people’s name that attend a family’s Christmas party.

I was intrigued by the Italian tradition of eating fish on Christmas Eve. Drawing on the Roman Catholic tradition of abstinence, which in this case refers to not eating meat or milk products, the Italian-American community took this tradition one step further with the Feast of the Seven Fishes.

This feast involves families coming together and sharing seven fish and seafood based dishes.

The first course is often something snack-like, since there are six more dishes to follow. So in honour of this Italian Christmas tradition, I prepared tuna and zucchini fritters with a corn and cherry tomato salad. 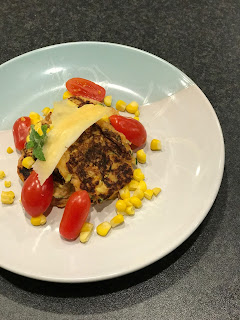 While not a traditional Italian Feast of the Seven Fishes dish, it is my take. To be honest, I love the idea of a fish-filled Christmas Eve. Such a great way to start the marathon of eating.

Fun-farewell yoghurt fact: “Genghis Khan, the founder of the Mongol empire, consumed yogurt with his armies.”

Feast of the Seven Fishes