June 13, 2015
I was one of those strange kids growing up – I didn’t really like pancakes. They never excited me.

This disinterest in pancakes stayed with me throughout university. However when eating breakfast with a friend at Billy Baxter I decided to try their savoury ham and cheese pancake. Its cheesy and meaty goodness transformed my opinion of the humble pancake. Then when joining Mr Bball at an annual Christmas eve pancake breakfast with his friends I was officially hooked.

So when friends were coming over for breakfast, I thought I would make a savoury pancake in honour of my Billy Baxter pancake experience. 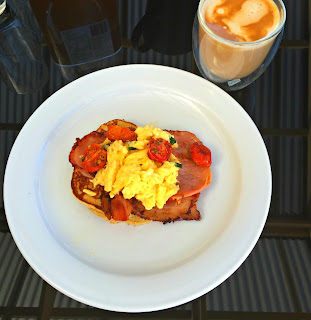 
Putting it together:
You can serve it with a tomato chutney if you like, or even a little hollandaise however we ate it just like that and it was light and yummy.

This is a nice alternative to standard bacon and eggs on toast. It will impress at a breakfast party and looks harder than what it is.